I find all kinds of interesting newspaper stories while researching. Some just beg to be shared.

The gist of this story, once you decipher 1800’s jargon and Latin, goes something like this…

At a certain time, prior to the year 1819, a local Medical Doctor of Portsmouth, New Hampshire was accused of stealing the body of a man named Brodus from the Point of Graves. It is not told how ‘fresh’ the body of Mr. Brodus was, nor his condition.

The Court issued a warrant for the house of the Medical Doctor to be searched and both the Doctor and Brodus be brought before the judges. The search found the body of Brodus in a chamber (coffin-like container) in the Medical Doctor’s study, but no Doctor was found. It was assumed that he had hidden himself away from the authorities. The Constable arrested the body of Brodus and then bailed him to another to keep watch over him while the Constable inquired of the Court what to do with the body.

The Court asked if the dead man had given any account of how he came out of the grave. It seems the Court was in much doubt as to whether they were to try the Medical Doctor or the dead man and called upon the lawyer for the dead man to show cause why he came out of the grave. But the lawyer declined giving reason that he was not fully instructed by his client. It was decided that they would adjourn for the day for advisement and the Constable was ordered to re-commit the dead Brodus to his grave and strictly order him to remain there until he be in mercy.

The Medical Doctor appeared before the Court later and it was unanimously decided that he should be convicted of Grave Robbing. Unfortunately, the Court was in doubt if the offense was a common law or statute and Counsel were asked to argue the point. The Court still being in doubt, could not render a judgement against the Medical Doctor. 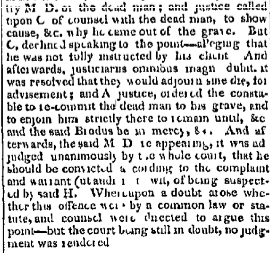 An obliging friend has furnished us with the following authentic report of a case lately adjudged in a neighboring state. As it will not probably appear in any book of reports, we hope that we render in service to the profession by giving it a place in our paper. {Boston Daily Advertiser}

And the said H. had cause to suspect, and did suspect, that one M.D &c. [etc.] assaulted said grave, &c. [etc.] dug up and carried away said body, &c. [etc.] and had said body in his possession, &c. [etc.] contrary to the form of the statute, &c. [etc.] wherefore he prayed process, &c. [etc.] — Whereupon J. Y. B. Esq one of the justices, &c. [etc.] issued his warrant, &c. [etc.] commanding the dwelling house &c. [etc.] of said M D to be diligently examined and searched, &c. [etc.] and the bodies of said M D and said Brodus to be brought before him, wheresoever, &c. [etc.] And afterwards curia sedent [court sitting], B H. jr one of the constables, returned the warrant, and certified that he had diligently searched, &c. [etc.] and that he had arrested the body of said Brodus, in a chamber in said M D’s study, and had then and there bailed him to one J. P. R. , who kept him in said chamber, &c. [etc.] but, that said M. D. had cloigned himself, &c. [etc.] and he prayed the court to instruct him whether the body of the dead man should be sent to the bar, &c. [etc.] Curia advisare [Court advisant], &c. [etc.] and A. justice inquired if the dead man had given any account how he came out of the grave. The court were in much doubt, ut semble [it seems], whether they were to try M D or the dead man; and justice called upon C. of counsel with the dead man, to show cause &c. [etc.] why he came out of the grave. But C. declined speaking to the point — alledging that he was not fully instructed by his client. And afterwards, justiciarius omnibus magn dubit [justice to all the great thrill] it was resolved that they would adjourn sum die [a day] for advisement; and A justice, ordered the constable to re-commit the dead man to his grave, and to enjoin him stricly there to remain until, &c. [etc.] and the said Brodus be in mercy, &c. [etc.] And afterwards, the said M D re-appearing, it was adjudged unaninously by the whole court, that he should be convicted according to the complaint and warrant ut audivi [I heard], to wit, of being suspected by said H. Whereupon a doubt arose whether this offence were by a common law or statute and counsel were directed to argue this point — but the court being still in doubt, no judgement was rendered.