It was a beautiful night to be outside and perfect for a New England Curiosities tour. Dusk was just beginning as we made our way across the cemetery, eventually standing beside (and on top of) the Vaughan tomb. There is a huge Maple tree that shadows the northwest corner of the cemetery and acts as a protector of the tomb. Its limbs were heavy with foliage and branches drooping within reach. As we turned to proceed to another grave, a leaf caught my eye. It had an interesting pattern and I wanted to look at it more closely. Not wanting to hold the tour up, I picked it to look at later.

After the tour dispersed, the conversation turned to the leaf. Roxie had seen me pick it and wondered why. I have to reiterate… I don’t know why. It was in the moment. It looked interesting. We held it up to light and saw lines that looked like they could be letters. Initials? Strange… I brought it home thinking I would preserve it between wax paper. A memento of sorts.

Pickwick’s at Strawbery Banke wanted a photo of the leaf to add to their scrapbook of ‘tour occurrences’. I couldn’t get a good photo because of the lighting in the room, so I held the leaf directly under the lamplight while taking a picture with my phone from above. What I saw through the viewfinder caused me to shake uncontrollably. I did manage to take 3 good shots and immediately sent them to Roxie. She immediately sent them to a mutual friend and all three of us didn’t sleep that night. 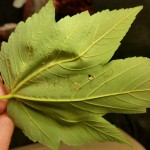 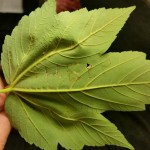 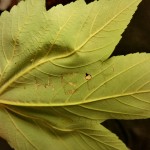 H E L P … that is what I saw written on the leaf. The leaf that I picked directly off the tree just hours before. The only thing going through my head at that moment was “Holy Shit!” Then … questions, questions, and more questions…

What did it mean? How did it get there? Was the tree trying to give a message? Spirits? Who needed help? Or was some snot-nosed teenager trying to play a trick and going to have a good laugh? I PICKED IT directly from the tree. It was high enough that I had to reach for it and I couldn’t imagine someone standing there trying to write on the leaf while it was still on the tree.

Roxie consulted a tree expert. His conclusion was that the leaf GREW that way. None of the veins on the leaf were broken, which would have happened if it had been written on by an external source. I have since tried to write on leaves. I can’t do it without tearing them.

What I do know, is that I have some sort of connection to those ‘residing’ in the Point of Graves. As I stood under the Maple tree later, I felt an emotion that brought me to tears. I looked out over the cemetery and saw not gravestones, but lives. I saw the children that were buried there. Left unknown and forgotten. No one to tell their stories. I’ve determined to tell their stories. They may not have lived long on earth, but they lived enough to make a difference in someone’s life and affect the future if only briefly.

As for the leaf… I don’t know if it is a one-time occurrence or if more messages will appear. Maybe messages have been written on leaves throughout time and it only took the right light to see one. Now that we know it is possible, will we be open to seeing more? Nature is always giving us messages. Maybe we need to pay attention.